It was early Spring, 1998, Glastonbury, England.

I was snuggled against the fence around a pasture of sheep munching on the lush green of their friendly environment, their tails idly wagging at the joy of being alive on that sparkling day.

Basking in pastoral delight, my eyes rested on a little lamb prancing up to his mom for a drink of her milky nourishment.

An approving ewe wandered around checking in with each of her friends before stopping to linger with the proud mom and her happy little baby. 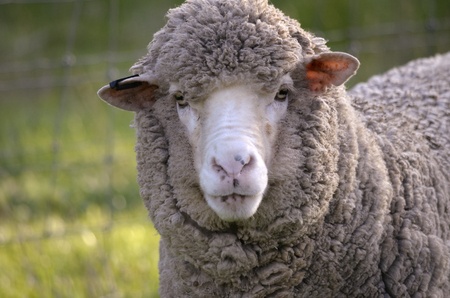 Then, the ewe set her eyes on mine. I was dumbstruck by those two deep pools brimming with wisdom and strength that comes from having endured much pain and sorrow.

Those eyes told me of her inner resilience in knowing that the most cruel and painful fate soon awaited her and each of her friends.

There was a striking peace about her though she knew that the little unsuspecting lamb would any day soon be wrapped in cellophane labeled, “Spring Lamb,”  just as her very own was once ripped from her nipples by the same hand of fate.

Not as evolved as the person with those eyes penetrating mine, I indulged in my horror, pity, and anger about the fact that everyone in this flock would soon have their lives cut short by slow torture and anguish.

I took advantage of the moment to let the ewe know what a good person I was; after all, I must be a good person if I could feel such pity for her and her family.  I felt so good and noble and sensitive, and so very, very superior. After all, no one else was even looking at the ewe, not even her own kind.

I was desperate to assure her that I was wallowing in pain just by my mere dwelling on her fate. It felt deliciously big of me to feel intense pity for her. I hoped…without being aware that I was hoping…that maybe a god somewhere was watching me.

I showed her my pity not with words, but with feelings, with pain in my eyes, a grimace on my face.

Her eyes immediately shifted from sisterhood to outrage and disgust.

Lowering her head, she made a beeline for the fence where I was sitting in the grass. I shrunk away just in time to avoid the angry head charging through an opening to bang sense into my thick, stupid skull.

She then raised her head and stood with pride…not to be confused with arrogance.  Her glare told me…

“Ass-hole, how dare you pity us, when you and your kind suffer more in your own minds, in your own hands, than we.  You are the victim.  Grow up!

“Stop using our journeys as an excuse to indulge in yet another pity party.

“Don’t save us. Empower us. That is the only way you can empower yourself, the only way joy can eventually reign on this beautiful evolving presence interpreted by your kind as, ‘life on earth.’ ”

Fast forward to one Sunday:

A woman who has an avian sanctuary called me to do a Reiki healing on a hen who she was convinced had cancer or a virus, and would be dead in a week.

I provided some ‘hands-on’ energy work on the hen too frightened for me to actually touch her. I could definitely feel the sensation of energy flowing between my hands and the hen, and I could feel the hen taking the energy in. All the time, I held the thought of her feeling well again. I could feel her heart was full of gratitude.

I told the woman that though the hen might have cancer as she suspected, it was of the utmost importance for her not to hold onto her expectation that the hen was so sick she would be dead in a week.

I urged her to be open to the possibility of the hen’s health improving. I urged her to keep in mind that at any moment she felt pity,  it was absolutely essential for her to quickly shift from pity for the hen, to instead, empower the hen with feelings of confidence and well-being.  (Here’s how to do that.)

The woman later posted on FB that the hen was improving.

What has this got to do with your pets?