We get stuck in human mindsets. We look at a dog bullying and chasing other dogs. We think, wow, that’s a true alpha dog. We don’t question if that dog is in his true power. We don’t look beneath his bravado to see if he might in fact be scared and putting up a false front…like some human bullies we might know.

Sense who the true alpha dog is here: 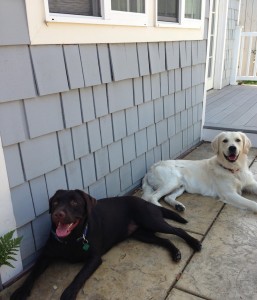 Difficult to know which is the alpha, right? Both beauties look present, alert, and focused.

Since I worked with both these dogs – Julie, the chocolate lab, Frank, the golden retriever – during phone sessions with their guardian, Priscella, I am impressed by who the real alpha dog is.

Julie acts like the alpha. She pushes Frank around. Makes her needs known. Acts scared of nothing. What a beautiful strong, caring canine she is. So intense in her love.  By old standards, she is clearly the alpha.

Frank lets Julie be the boss. He allows her to be herself. I sense he truly gets who she is as his caring playmate. He doesn’t feel diminished by her insistence on being the lead dog. He is truly comfortable in his own skin. And because he cares so much for Julie, he doesn’t want her to feel more insecure than she already is.

Frank is the true alpha. The true leader. He is secure enough within himself to allow Julie to dominate out of her need to feel strong. Eventually, because she is so loved and accepted in her often annoying displays, she will lose the need to assert herself so aggressively.

Julie and Frank seem human in their attitudes, don’t they?

They are very much like us regarding our secure and insecure ways of behaving.

And we are like them. After all, we are animals.

And if ever we do manage to grow into the truly loving and democratic animals that Nature intended, we will as a human species be more easily at peace with ‘flaws’ in our human counterparts.

We will graciously create the space needed for even the most aggressive humans, aka, bullies, to grow and stretch into the love hidden down deep within themselves.

Anyway, that’s what nonhuman animals teach me about us.