Here’s the gist of what a desperate man said to me in his cry for help: “Brought this rescue dog home from the shelter a couple of months ago. I figured, wow, my new friend to come home to! He’ll be excited at the very sight of 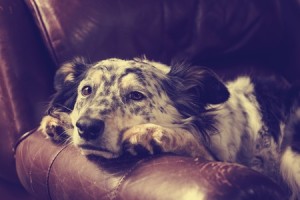 me. He’ll play ball with me.

Get me to go running again. Entertain me. Worship me. Instead, I got stuck with a rescue dog that might as well be dead.”

I asked the rescuer if, in his heart of hearts, his intention was to rescue himself or the dog?

He surprised himself with his answer. Surprised me, too. He realized that it was he who he was trying to save from what he judged to be, his boring self.

In my connecting with Stud, the rescue dog, I got that Stud didn’t quite know how to be with humans, since he was mostly on his own before the shelter.

My previous post talks about communicating with a cat who was nasty aggressive, the cat’s way of compensating for his own lack of human social skills.

We aren’t the only mammals who are individuals, or who might lack social skills. Animals are unique in how they think, how they respond, how they learn, how they cope, how they love. (The ones on plates also had minds of their own.)

Stud played dead with his strange guardian because his guardian failed to take the time to connect with him, hear-to-heart. The only way to be real with anyone, is to connect with the heart, right?

Heads don’t connect two beings. Heads connect the dots, not the heart. This is what animals tell me, including a few human ones.

Approaching any animal solely by way of your talking head, is a dead end to the possibility of true communication.

Only your heart can lead to the deep connection you want with any animal you choose to bring home.

The above is the gist of my conversation with the rescuer, after checking in heart-to-heart with Stud.

Stud was the one actually guiding the conversation.

Turns out Stud was pleading for the same thing as the rescuer: “Please rescue me from this deadbeat,” Stud’s paraphrased plea.

The heart is the common ground where real communication begins. Communication is the ‘inter-action’ that takes place on that ground.

Taking action from the interaction, takes a committed mind balanced with the heart.

We all know that the stereotypical man tends, I say, tends, to get stuck in his mind. Many women, in their hearts.

Nonhuman animals are natural examples of being at home with their minds married to their hearts living in perfect harmony.

Bringing an animal home brings you home…when you listen to who s/he is, and to what s/he needs from you to make you both happy.

I know you all know this, or you wouldn’t be on this page. Just reminding myself.

I wonder if this is how marriage counselors talk.