Wanting her cat dead was so secret, even she didn’t have a clue why she forgot to close the window the day he fell to earth.

But her cat lived to tell his tale, and was quick to clue her in, in our chat. 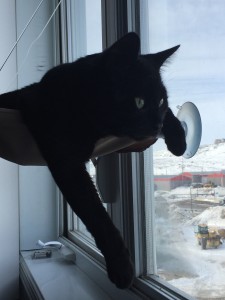 You might shudder, thinking what a nasty person she is.

She’s not. She’s just human. A rare, honest one.

Whenever someone tells me they wish they never had children, or if only their animals could disappear into some golden cloud of faerie dust, I sigh realizing this momentary coping mechanism in humans is still the norm.

Admittedly, I am forced to remember that I, the vegan animal communicator, once begged a friend to adopt my 3 month-old pup whose teeth on steroids were too sharp for my thin-skinned state of mind at the time. I am so very relieved she refused.

Happy to say, so is my now grown-up almost 5 year-old canine bud.

In a going nuts moment of wanting to jump out the window, or wishing your animal would, is understandable.

How we react or respond to our unconscious cry for help, can be a matter of life or death. For the animal.

Like every animal – you included – Freddy, the cat was born to love. Growing up in the streets of downtown, anywhere, kept him out of touch with his true nature.

He wanted his guardian to help him fit into her human world, to show him how to express the affection she wanted.

Instead of ending up dead or back in a shelter, Freddy lucked out in having a guardian who was intent on finally understanding him, and his needs.

The week following our phone session, he even let out a purr, a first ever according to his guardian. And instead of clawing her as usual whenever she got too close, he actually jumped on her and stared into her eyes with total love and awe. . .the way we all want to be seen.

Now that they see each other for who they are, they can relish the possibility of a relationship of give and take, full of awe, appreciation, and inspiration.

They’re making a difference in their world, and the world around them.

Think how fewer animals there would be in shelters if their guardians had considered that bonding with a nonhuman animal requires as much love, patience, and understanding as we invest in our connections with humans.

By the way, Freddy suffered a broken jaw from the fall. Most of us repress anger in our jaws. Now that he got to communicate his anger about not having been understood, and with a little energywork over the phone, his guardian told me yesterday that the vet is amazed by his speedy recovery.

If your animal companion is not giving you what you want, please consider an animal communication session as a means to understand what s/he as an individual, might want…not what you think s/he wants based on species specific generalities.

It could save a life. And change your own.