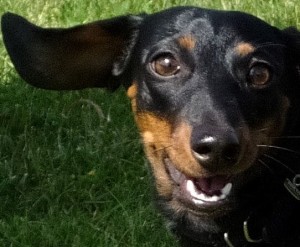 “You never know with animals,” the young student in the parking lot said sheepishly, after telling me that his girlfriend’s dog was a cute, little female dachshund who(m) she loved ever so much.  She agreed to get rid of the dog because the dog bit him.

Once. The dog bit him, once.

“So, what happened that the dog bit you…once?”

“Oh, I was rushing in the morning to leave. Bent down to take her out of the crate to feed her, and she bit my finger.”

“You were probably all tensed up inside because you were running very late….you were late, weren’t you?”

“Yes. I was running late, and pretty tensed up.”

He then quickly added, “Our place is too small for the little dachshund. She would be better off on a farm.”

We both pause to look at my little dachshund friend sniffing his somewhat plump Lab dog.

Do you see where I’m going with this post? His girlfriend had the dog as a puppy. He said she was very attached to her dog. I assume – I could be mistaken – the dog slept on her bed, before her boyfriend came along six months ago.

It’s pretty obvious that since this is only the first time that the dog ever snapped in her whole life, the dog was intimidated by his sudden impatient, aggressive, and perhaps angry energy that he was late. When he rushed over to her crate and lunged down to grab her out of the crate, she was terrified, and bit him.

If ever you find yourself thinking you never know with animals, take a long look in the mirror before you get rid of your pet. Please. Or contact me for an animal communication session by phone. We’ll get to the bottom of the issue and resolve it.

You might also want to read this animal rescue list of excuses people make to soothe their guilt about no longer wanting their pets around.

You never know with people. Her place was too small for her mini-dachshund, but not for his chubby Lab?