I received a strong impression from a cat that she wanted frowns on her friends’ faces, instead of their constant gooey smiles 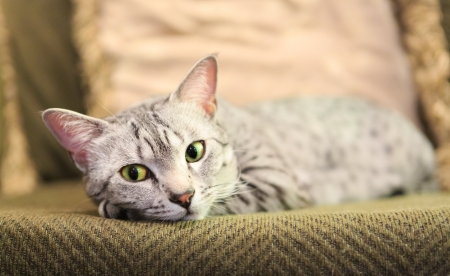 of affection regarding her feline self.

She communicated that she began biting the base of her tail making it bald and inflamed because undying affection was driving her mad with boredom.

When I asked her why she would cause herself and her humans pain, her answer was this, only without words:

“Adoration is all they show me. I want other shapes of love, worry being a big one of them. I want to know what worry pain is like for me and for them where I am concerned. Pain is part of Life. My two friends want pain because I see them making all kinds of it for themselves…anger…horror…stress, yet, they complain that pain is bad; probably why it feels bad to them. They make it their favorite teacher, yet they dread it. I need to get it.”

So, am I hearing correctly, that you want to be human?

“No. I want to be more than the status quo boring bored house cat with limited emotional experience. I want to be forever evolving living life passionately, not imitating it. I want to bask in the full emotional range of being alive. ”

Would you want to be a dog?

“Why would you think that I would want to plummet that low?”

“Yes, if that’s what it takes to feel the other side of pleasure.”

Why wouldn’t you want to instead, slip deep down inside yourself and bask in the empty peaceful space between emotional polarities, the only thing that’s truly real in any of us?

“If I wanted just that, then, I would have stayed on the eternal other side, and not be on this side of life talking to a halfwit.”

You’re pretty smart for a cat.

“You’re pretty stupid for a woman.”

Did your paw just swat my face?

Being judgmental is not human, it’s animal; just as is, unconditional love.

Pleasure and pain and the space between: we can’t have one without the others. At least, not on this side of life, or we might as well be dead.

Just my take on interacting with a certain feisty cat.