You are made in the image of God and had better live up to it is the religious underlying mindset of our society. Whether you are a Christian, a Buddhist, a Muslim, a Jew, a Hindu, a pagan, an agnostic, an atheist, or a believer that you were genetically engineered by aliens or by your own will, if you are reading this, you are on the same page as our progressive collective consciousness. We are in agreement that it’s time to be whole and feel good about ourselves for a Change. 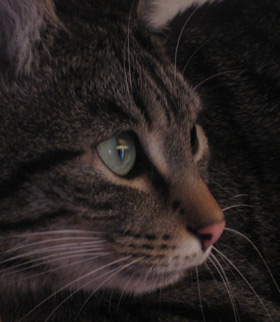 If you look past the human in your mirror, you will recognize the spitting image of Nature no longer to be spat at, but to be lived down to: say hello to your body, your animal self.

Living deep down in our bodies in our true animal essence is where spirituality is alive and well, where we reclaim our grace with Mother Earth, where we commune with all that is.

A mirror I found intriguing belongs to Noreen who has two significant other animals reflecting who she is.

Mau Mau, the tough street fighting cat, and Jackson, the Shih Tzu, gentle and all accepting of human foibles. They live with Noreen, a music teacher, in California. Much was revealed.

Mau Mau, clearly his own master, mirrors Noreen’s lower chakras—her vital life force energy centers, her personal strengths. Before the session, Noreen did not identify with Mau Mau. He is a salt of the earth survivor. He couldn’t be as spiritual as Jackson with whom her energies were closely aligned in her upper chakras.

Jackson and Noreen are healer types. They have huge hearts and over give of themselves. I told Noreen that Jackson feels to me like he has smoker’s lungs. She then told me she smokes. And so, in a resonant kind of way, so does Jackson.

Noreen smokes because unlike Jackson, she felt she needed to protect herself from feeling the intense discomfort of those needing to flock around her. We all put up smokescreens of one kind or another. Not one ultimately higher than the other to shield ourselves from what we fear as negative energies.

Jackson doesn’t judge our pain. The frequencies of pain emanating from Noreen’s students ripple to, through, and out of his body without the presence of fear to lodge them in his body.

He is a shining reflection for anyone scared of ‘catching’ other people’s pain. He, like the animal he is, feels our pain, but doesn’t hold onto it. Letting go is one animal trait we as a species are learning to access within ourselves. Noreen has Jackson showing her how. Your animals can show you how.

Mau Mau gets a kick out of swatting Jackson so that Jackson will someday be more grounded in his body, and stand up to the power animal in his own mirror.

Mau Mau insisted he would continue to harass Jackson until Jackson stopped pussy footing around him, and started acting like the canine he is.

Weeks later, Noreen tells me something has changed since our talk. Mau Mau’s heart has softened towards Jackson.

Jackson is breathing easier and now challenges Mau Mau with a game of cat and mouse with Mau Mau as the mouse. And Noreen feels less the need to shield herself, and more the joy of sending each puff of smoke with a prayer of peace for ‘heaven’ on earth.